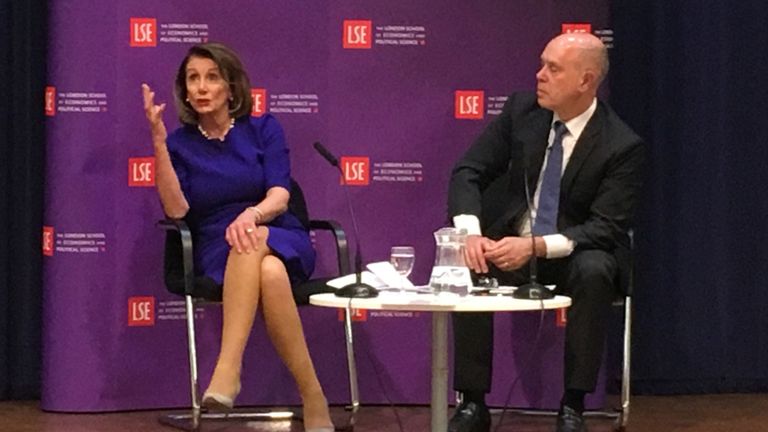 A US-UK trade deal will be dead in the water if there is any weakening of the Good Friday Agreement, a top American politician has warned.

Nancy Pelosi, Speaker of the House of Representatives, said the agreement was a model that could not be “bargained away in another agreement”.

The 1998 accord brought to an end the Troubles, decades of violence involving unionists and republicans over the future status of Northern Ireland.

Ms Pelosi told a lecture at the London School of Economics on Monday that getting a trade bill passed by Congress would be difficult and was “no given”, even without the Irish border issue.

She said: “First of all it is very hard to pass a trade bill in the Congress of the United States, so it’s no given anyway.

“But if there were any weakening of the Good Friday accords there would be no chance whatsoever, a non-starter for a US-UK trade agreement.

“This is not a treaty only, it’s an ideal, it’s a value, it’s something that’s a model to the world, something that we all take pride in.

“It was a model and other people have used it as a model and we don’t want that model to be something that can be bargained away in another agreement.”

An open border was one of the legacies of the Good Friday Agreement, with avoiding a return to a hard frontier emerging as one of the key sticking points in the Brexit process.

Dublin and the European Union are insisting on a backstop, an insurance policy which would see the UK as a whole remain in a customs union with the EU – and Northern Ireland follow further EU rules and regulations in order to keep the border frictionless – if Britain and Brussels cannot agree a free trade deal.

Some Tory MPs – and those in Northern Ireland’s Democratic Unionist Party – have called for the backstop to be removed from the Brexit deal altogether.

They oppose it because they fear it will weaken the constitutional integrity of the Union as Northern Ireland would be treated differently to the rest of the UK.

They have also expressed fears Britain could end up being trapped in the arrangement indefinitely.

Ms Pelosi told the audience that she had held talks with Labour leader Jeremy Corbyn and senior Conservatives during her trip to the UK, as well as speaking with Prime Minister Theresa May on the phone.

She said: “We have met the Speaker. We met with the leader of the opposition Jeremy Corbyn and we met with those who left the Labour Party and we made it clear to all that if there’s any harm to the Good Friday accords – no trade treaty.

“Today we met with the government, with the Chancellor of the Exchequer and deputy prime minister and those who are in opposition in the Conservative Party and to all of them we made it clear: don’t even think about it.

“Every single person, including Theresa May, who I spoke to over the phone, said ‘don’t worry about that, we would not even go there’.”