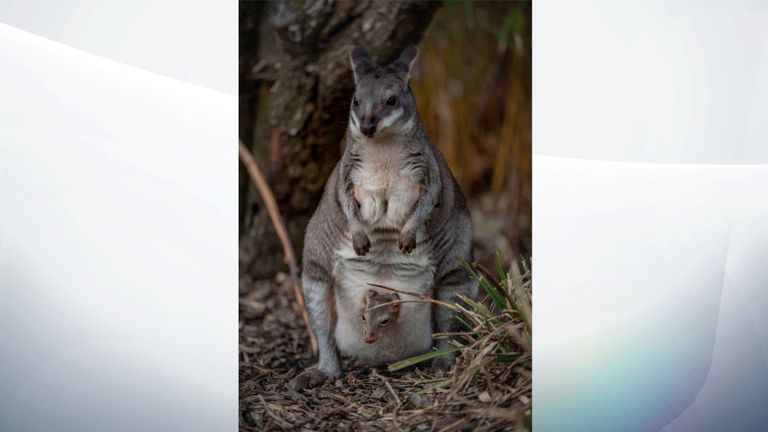 A rare “miniature kangaroo” has just started to peek out from its mother’s pouch after being born at Chester Zoo.

The dusky pademelon, also known as a dusky wallaby, is a hopping marsupial from Indonesia.

The baby was born earlier in the spring to first-time mum Styx.

They are born 30 days after mating and continue to grow in their mother’s pouch until they full emerge at around seven months.

This is the moment a little joey starts to peek out of mum’s pouch… and it’s completely adorable! pic.twitter.com/QTvmPWPycp

“An adult dusky pademelon’s pouch has a powerful muscle to prevent the joey from falling out, but it won’t be too long until it’s ready to fully emerge and start hopping around on its own two feet,” said Chester Zoo’s Dave White.

“That’s when we’ll discover whether it’s a boy or a girl and choose its name.”

The dusky pademelon is found in the Indonesian forests of New Guinea, as well as some neighbouring islands, but is at risk of extinction.

Its population is estimated to have declined by 30% in the last 15-20 years, largely due to trapping, hunting and habitat loss.

The International Union for the Conservation of Nature has said the species needs monitoring to ensure its survival in its home habitat.