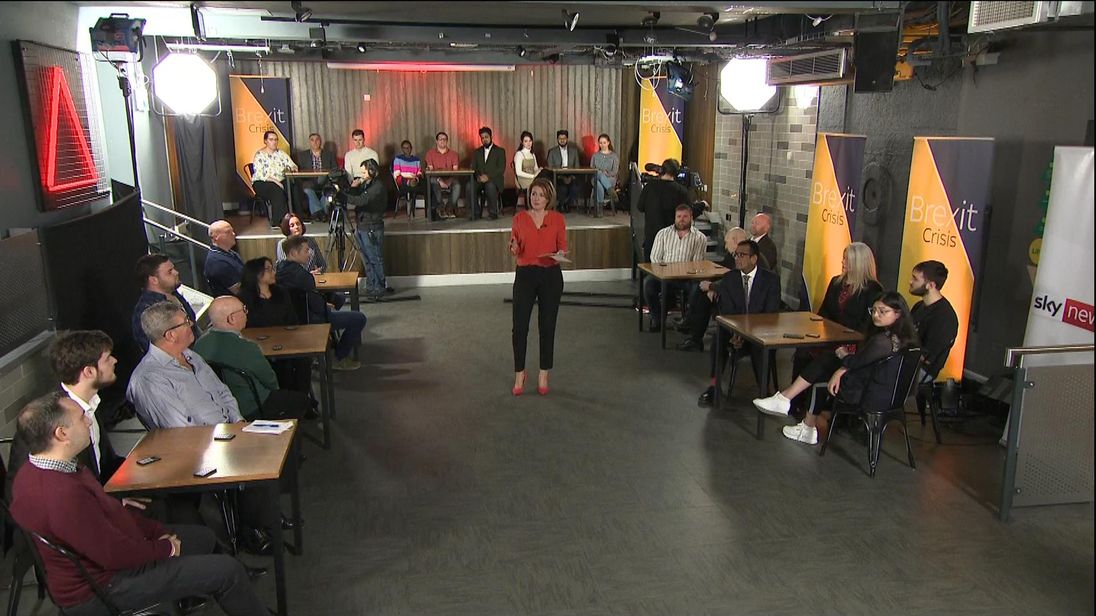 The pro-Brexit feeling in Leeds – a city that was split almost half and half in the 2016 referendum – appears to have grown, according to the results from a series of Sky News debate polls.

An invited audience of local voters offered an eye-opening insight into how they were feeling about the UK’s break from the European bloc during an hour-long special live on Sky News.

On what was a frosty night in the Yorkshire city, where 50.3% voted for Remain and 49.7% opted for Leave in the referendum, heated debate raged at the Leeds University Union.

Some 54% of the Brexit Crisis: Deal or No Deal? audience said the UK was right to have voted Brexit, in contrast to the national picture painted by the latest Sky Data poll which found 51% thought the UK was wrong to have voted Leave.

‘I think a second referendum would be an insult to democracy’ – Paul, a leave supporter, says that politicians have been undermining the referendum result for the past two years and need to do their job by delivering Brexit.

One debate participant said it would be a “conspiracy against democracy” if the UK did not leave the EU and hit out at the “political class” who he said was “attempting to overturn the referendum”.

Another called for Theresa May to put together a cross-party team to look at the various options on the table.

Meanwhile, a third participant maintained the EU was “not working against us” and dismissed the idea the bloc was a “big, evil corporation” as another said it was time for Mrs May to resign.

The debate participants did reflect the rest of the country when it came to whether the UK should have another Brexit vote, with 58% in Leeds voting against another referendum.

“I think a second referendum would be an insult to democracy,” said a Leave supporter, who added that politicians had been undermining the referendum result for the past two years.

But a Remainer in the audience said people were now better informed about Brexit and that there should be another vote on it.

“There was a lot of misinformation and a lot of lies at the time when people were asked to vote,” he said.

When it came to the question of delaying Brexit, the nationwide poll was split equally but in Leeds, 54% said Britain should not delay leaving the European bloc.

One woman said it was time to put an end to “endless squabbling” after two years of “not getting anywhere”.

“An end needs drawing to it, we need an end date,” she said.

A Remain voter, who wants to revoke Article 50 and leave the EU when an exit deal is ready, disagreed and said the country was not united and by leaving on 29 March it was not “healing” the divide.

As for leaving the EU without a deal, Sky’s Leeds participants went against the grain of the rest of the country with 54% of the audience wanting a clean break from the bloc.

“It’s not just about me, it’s about sovereignty and democracy,” said a business owner, whose import firm will be affected by a no-deal Brexit.

He said he voted Leave in the referendum and is even more adamant now that he made the right decision.

But one Remain voter said she was “terrified” of no-deal, saying it would “destroy our car industry”.

She said it was not “Project Fear” but “Project Facts” and urged people to “listen to experts”.