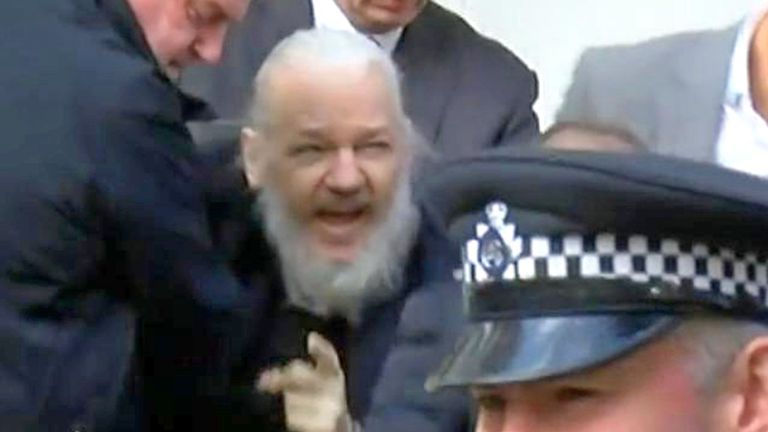 Christine Assange said she would “fight like hell” to secure his release.

The Wikileaks founder was forcibly removed after seven years in the Ecuadorian embassy in London and faces extradition to the US on charges of conspiring to break into a classified government computer.

He shouted “UK must resist” as he was carried out in handcuffs by seven men and put into a waiting van.

He was later found guilty of breaching bail by a judge at Westminster Magistrates’ Court.

Lashing out on Twitter, Ms Assange claimed Theresa May was “trying to divert attention away from her Brexit dog’s breakfast by cheering on the thuggish, brutal, unlawful arrest of my courageous, tortured multi-award winning journalist son Julian!”

“May the face of my suffering son haunt your sleepless nights.. And may your soul writhe forever in torturous Purgatory as you have tortured my beloved son!”

She also criticised District Judge Michael Snow, who had described Mr Assange’s behaviour as “that of a narcissist who cannot get beyond his own selfish interests”.

Ms Assange tweeted: “UK judge should NOT be making statements like this! This is (a) rubbish Legal process!”

The treatment of Mr Assange has also been criticised by Labour leader Jeremy Corbyn and shadow home secretary Diane Abbott.

Mr Corbyn wrote in a tweet: “The extradition of Julian Assange to the US for exposing evidence of atrocities in Iraq and Afghanistan should be opposed by the British government.”

Speaking in the Commons, Ms Abbott expressed her support for the Wikileaks founder and said he was being “pursued because he has exposed wrongdoing by US administrations and their military forces”.

She also told the BBC’s Today programme that the prime minister should block Mr Assange’s extradition to the US after Mrs May previously intervened in the case of computer hacker Gary McKinnon.

Ms Abbott said: “It is not the rape charges, serious as they are, it is about WikiLeaks and all of that embarrassing information about the activities of the American military and security services that was made public.

“He is at the very least a whistleblower and much of the information that he brought into the public domain, it could be argued, was very much in the public interest.”

Former US presidential candidate Hillary Clinton said Mr Assange needs to “answer for what he has done”.

Australian PM Scott Morrison also said Mr Assange would not get “special treatment” from his native country, after receiving a request for consular assistance.

The Ecuadorian government withdrew Mr Assange’s asylum yesterday, accusing him of interfering in international affairs and being rude to embassy staff.

The 47-year-old had been living in a small corner room at the Ecuadorian embassy as a self-proclaimed political refugee.

He had a space equipped with a bed, kitchenette, shower, phone, computer, treadmill and bookshelves.

One person who had visited the room three years ago described it as “a gas station with two attendants”.

Swedish prosecutors say a woman who accused Mr Assange of rape has asked for the investigation to be reopened.

A man who is alleged to have links to the Wikileaks founder was arrested in Ecuador on Thursday night while trying to flee the country.

The individual, believed to be Swedish software developer Ola Bini, was held at Quito airport as he tried to board a flight bound for Japan.

‘A walk in the park’: Mick Jagger pictured for first time since surgery | Ents & Arts News