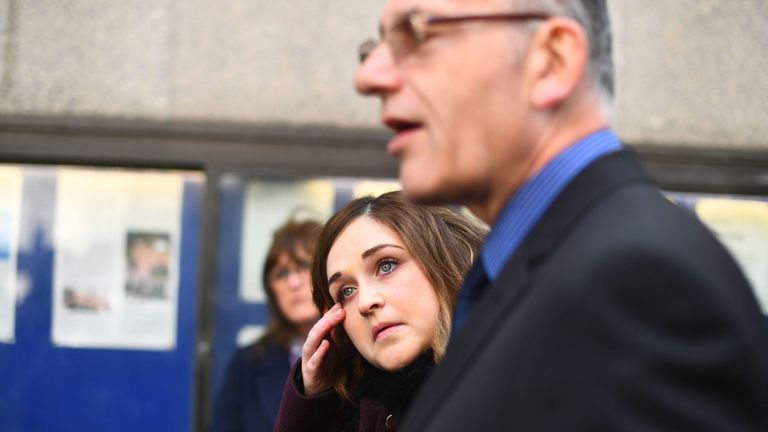 Speedboat killer Jack Shepherd has been sentenced to six months in prison for going on the run after being convicted of the manslaughter of Charlotte Brown.

The 31-year-old had already been sentenced to six years in jail for Ms Brown’s death. The sentences will be served consecutively.

Speaking outside the Old Bailey afterwards, Ms Brown’s sister Katie broke down as she made a statement.

Shepherd’s “lack of respect and decency continues to astound us”, she told reporters.

Her father, Graham, said that while there was a “sense of relief”, Shepherd had shown “no remorse and he hasn’t taken any responsibility for the dreadful actions he caused that night”.

Shepherd, who returned to the UK on Wednesday, was convicted in his absence of killing Ms Brown during a champagne-fuelled first date on London’s River Thames in December 2015.

It is believed his defective speedboat overturned after striking a submerged log, throwing Ms Brown, 24, into the icy water.

Shepherd spent 10 months on the run, but turned himself in to a police station in the Georgian capital of Tbilisi in January.

His lawyer, Andrew McGee, said Shepherd was “overwhelmed by his fear” of a prison sentence and wished to apologise to Ms Brown’s family.

Mr McGee told the court: “It was motivated entirely by a fear of the possible outcome of proceedings.

“It was not deliberately callous or cavalier. It was not cynical or calculated.”

During his flight back to Britain, Shepherd told reporters he was “trying to make amends”.

He added: “There really have been some complete untruths, in particular this idea that I let her drown, that I did nothing to help her – this could not be further from the truth.”

The judge told Shepherd that his was an “exceptional case”, and that in making a “conscious, deliberate and considered decision” to go on the run he had “hugely added to the distress of Charlotte’s family who could not have known when, if at all, you would be apprehended, you the person who had spent the last hours of her life with their beloved daughter and sister”.

He added: “Your conduct in absenting yourself from justice for so long was as cowardly as it was selfish.”

The judge also presided over Shepherd’s trial, which began last June, and noted that Shepherd had been in contact with his lawyers from his “hideaway” during those proceedings.

“I was presented by your counsel with a detailed statement from you,” the judge said.

“You were, in effect, having your cake and eating it.

“This is not how our system of justice is intended to operate.”

Katie Brown said outside court that the family was “relieved that Jack Shepherd is now back in the country and commencing his prison sentence”.

She added: “It’s a step closer to justice for Charlie.

“Shepherd has continued to prolong our agony, making wild accusations against our family.

“I feel throughout the whole process that he continues to be in denial of any kind of responsibility, as though he’s almost convinced himself he’s the victim.”

Coronavirus: Rush Limbaugh and Fox News' Laura Ingraham are denying the risk in an attempt to protect Trump

Coronavirus: Rush Limbaugh and Fox News' Laura Ingraham are denying the risk in an attempt to protect Trump