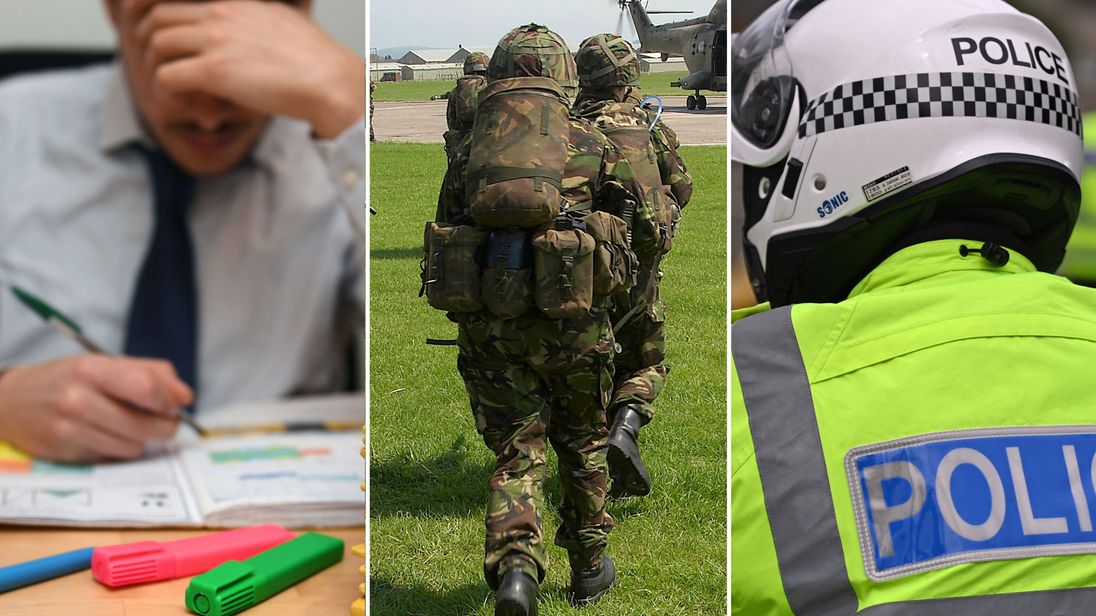 Almost a million public sector workers will receive an above-inflation pay rise, the government has announced.

Teachers, soldiers, doctors and police will have their salaries boosted after ministers received the findings of seven pay review bodies.

The pay rises will see:

The increases in public sector pay come in the last days of Theresa May’s tenure in 10 Downing Street, with the prime minister set to depart on Wednesday.

The timing of the announcement will be viewed as part of Mrs May’s so-called legacy spending, with the prime minister having used the last few weeks of her premiership to make a slew of announcements on non-Brexit matters.

Treasury sources confirmed the pay rises will be funded from existing departmental budgets, with ministers having had to agree the increases are affordable within current cash allocations.

Mrs May said: “Whether it’s keeping us safe, saving lives or educating the next generation, our public sector workers deserve this pay rise in recognition of the brilliant job they do on a daily basis.

“In 2017 we ended the public sector pay cap and I’m pleased that we can build on this today by giving almost a million of our dedicated public servants an above inflation salary increase.”

The government pointed to the pay rises being higher than the current 2% CPI rate of inflation for the 2019/20 financial year.

Chancellor Philip Hammond, who intends to resign this week if Boris Johnson is announced as Mrs May’s successor, said: “Public sector workers deliver Britain’s world class public services and should be properly rewarded which is why I’m confirming a second year of above inflation pay rises today.

“This is in recognition of the hard work of millions of people, including soldiers, teachers and doctors, and will help us recruit and retain the best staff.

“We are able to afford these pay rises because our balanced approach means we have reduced our debt while investing in public services, including pay.”

She said: “Teachers will welcome this well-deserved pay increase but it will subject schools to further misery.

“No headteacher should have to make these sorts of decisions – schools should be fully funded and teachers should be paid properly.”