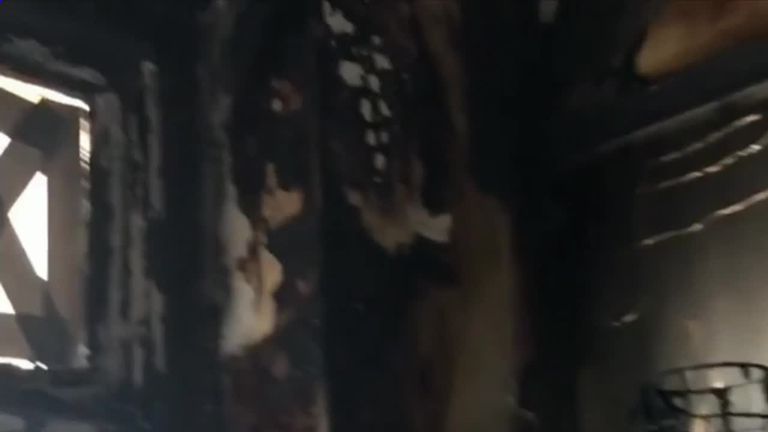 Dame Joan Collins has thanked emergency services after a “terrifying” fire broke out in her London flat.

Fire crews were called to a seven-storey building on Eaton Place, Belgravia, at 4.30pm on Saturday.

The blaze was brought under control around an hour later by 10 firefighters.

In posts on social media, Dame Joan shared pictures of walls and a window frame blackened by the flames.

A video posted to Instagram shows the damage to her flat. The actress can be heard saying “Oh God,” while surveying the walls.

She thanked London Fire Brigade “from the bottom of my heart” for attending “the terrifying fire yesterday in our flat”.

Dame Joan said her “hero Percy [Gibson]”, whom she married in 2002, “had already doused the flames consuming the entire wall with handheld extinguisher”.

The 85-year-old, who was made a Dame in 2015 for her services to charity, also thanked the ambulance services and police.

She said the ambulance staff took “care of our smoke inhalation” and comforted her, while the police closed the street and “made everyone safe”.

The Dynasty star was honoured in 2015 by the Prince of Wales for services to charity, but at the time Dame Joan said all she wanted to be at the start of her career was a “jobbing actress”.

She said: “Not in a billion years did I think I would be made a Dame, it never even crossed my mind.

“It wasn’t anything I ever aspired to, I just wanted to be jobbing actress, a working actor and somebody who could still perform.

“I do my one woman show a lot, which I love doing,” she said, adding: “But I have a lot of irons in the fire, none of which I can talk about.”