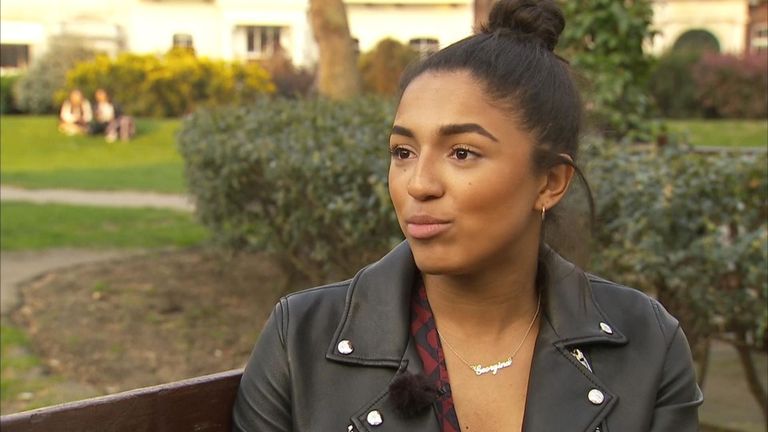 Georgina Elliot, 21, is living with Crohn’s disease and posts videos to YouTube documenting her experiences.

Now she is calling for more public understanding about the condition.

The majority of people with invisible disabilities are being abused and humiliated when trying to use disabled toilets in public, according to a survey.

Crohn’s and Colitis UK found 61% of people with the bowel conditions had experienced verbal or physical abuse for using disabled facilities and nearly two thirds had not been allowed to jump the queue when in a desperate situation.

Ms Elliot was first diagnosed with Crohn’s in 2017, after experiencing symptoms for three years and struggling to get a true diagnosis.

The influencer said finding out about the disease made her “really, really scared”, especially as it is incurable and sufferers will have Crohn’s for life.

She said she knew “nothing about it” beforehand and assumed that people with Crohn’s simply “go to the toilet all the time”.

“There’s the fatigue, sleeping 19 hours if we can without someone waking us up, the joint pain, sore pain when you walk, not being able to eat anything without agony. It’s not nice.”

She added the disease had knocked her confidence and made her feel “incapable” after realising she could no longer keep up with friends.

“I couldn’t do things that my friends could do in the sense that I’d go out with them and I’d get drunk with them and have a great time and I’d party but after, it would take the life out of me and I wouldn’t be able to function for about two days.

“And that’s quite a mental block because I’m young – I’m only 21 now so since I was about 17, I’ve not had as much energy as anyone else.”

The 21-year-old has experienced negative reactions when trying to explain her condition – including disbelief.

“It’s something I openly discuss with people. I’m never ashamed to have my bag,” she said.

“But then also it’s quite hard because people can be quite shut off to that.

“If you do explain it, if they can’t see it then they don’t believe it.

“That’s one of the hardest things because you then feel like you’re moaning about nothing because they make out that it’s nothing so you play it down, which inevitably with Crohn’s disease, makes you more poorly because you have to tend to it and you have to be aware of it all the time.”

Ms Elliot said she has faced a number of events which made her feel uncomfortable, including an incident outside a nightclub where a bouncer would not believe she was carrying a colostomy bag – instead thinking she was trying to smuggle in alcohol.

After not being allowed into the venue for 20 minutes, she eventually showed the bouncer her colostomy bag – but said it had “ruined” her night.

“It’s private to me. It’s something I have to deal with. It’s not something I should have to show you for you to be compassionate towards me,” she added.

On another occasion, she was trying to empty her bag inside train toilets when a guard began knocking on the door to check she was alright.

She has also been confronted when waiting in the queue for disabled toilets and forced to explain her condition.

The influencer said: “I feel like I shouldn’t have to explain the ins and outs of my disease to people.”

However she admitted that she had once been “naive” and “ignorant” to the condition as she had not been taught about it.