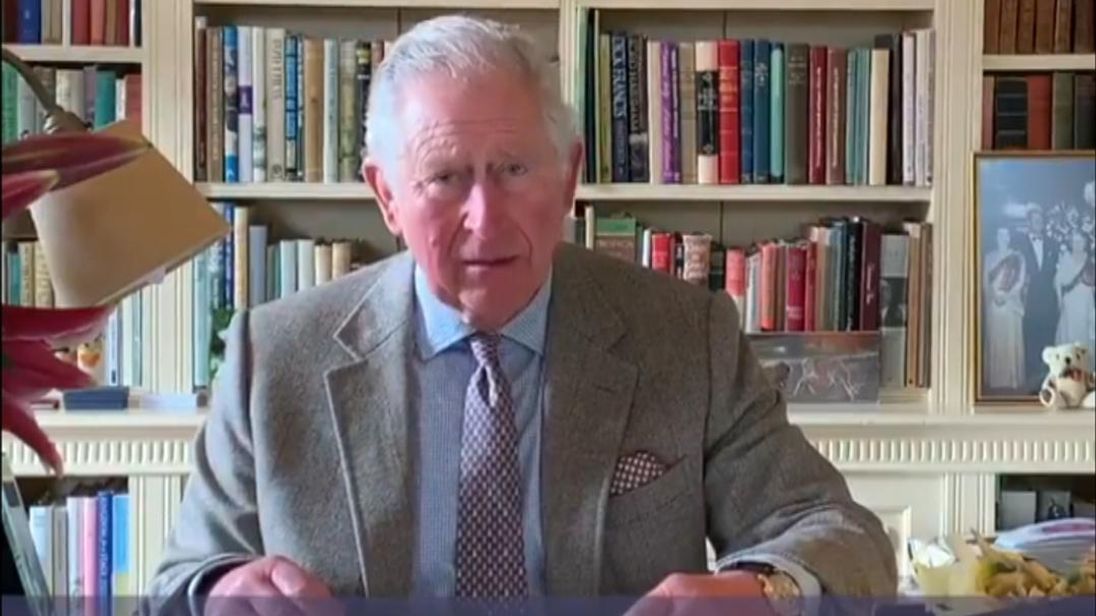 Prince Charles has delivered a message of hope to the nation during the coronavirus crisis, praising the “remarkable NHS” as its staff “battle heroically to save lives”.

The Duke of Cornwall was making his first public appearance since coming out of self-isolation after his own diagnosis with COVID-19, the disease caused by the coronavirus.

He spoke in recorded video message in support of the charity Age UK which he represents as patron.

Prince Charles told the nation it was a “strange, frustrating and often distressing experience” when people were separated from loved ones.

In his video message, posted on royal websites and social media, Charles said: “As a nation, we are faced by a profoundly challenging situation, which we are only too aware threatens the livelihoods, businesses and welfare of millions of our fellow citizens.

“None of us can say when this will end, but end it will. Until it does, let us all try and live with hope and, with faith in ourselves and each other, look forward to better times to come.”

The footage was recorded by staff at Birkhall, the prince’s home in Scotland, on Tuesday.

Charles continued: “And at a time when doctors, nurses and all the vital ancillary staff that form the backbone of our remarkable NHS are increasingly under such enormous strain, and risk, as they battle heroically to save lives in intensive care centres and to contain, as much as possible, the spread of this virus, our thoughts and prayers are very much with those marvellous people whose extraordinary skills and utter, selfless devotion to duty and the care of their patients make us so very proud.”

Clarence House announced the 71-year-old prince, who developed mild symptoms of COVID-19 over the weekend of 21 and 22 March, had completed his period of isolation at Birkhall in Aberdeenshire on Monday.

Charles said in his recorded message: “Having recently gone through the process of contracting this coronavirus – luckily with relatively mild symptoms – I now find myself on the other side of the illness, but still in no less a state of social distance and general isolation.”

He added: “As we are all learning, this is a strange, frustrating and often distressing experience when the presence of family and friends is no longer possible and the normal structures of life are suddenly removed.

“At such an unprecedented and anxious time in all our lives, my wife and I are thinking particularly of all those who have lost their loved ones in such very difficult and abnormal circumstances, and of those having to endure sickness, isolation and loneliness.”

The message was recorded on Tuesday morning by staff at Birkhall, the prince’s home in Scotland.

The Duchess of Cornwall, 72, tested negative for the virus and remains in self-isolation until the end of the week, observing the advice to separate for 14 days.