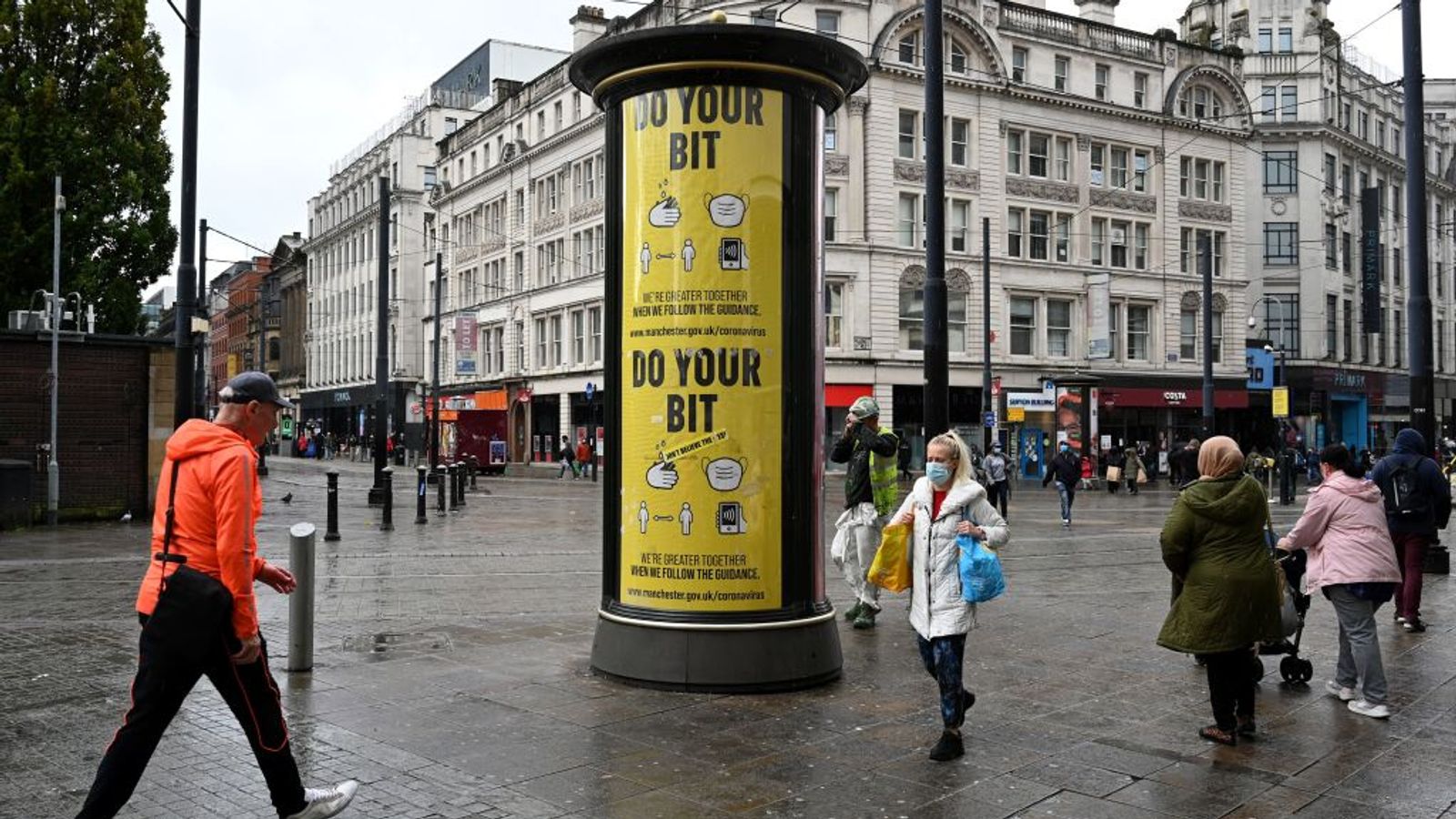 Leaders in the north of England have warned further coronavirus restrictions would have a “devastating” effect on the country and the overall regional economy.

Their comments come as Prime Minister Boris Johnson is set to make a statement to MPs on Monday amid expectations that a three-tier local lockdown system will be introduced across England.

The mayors’ warning comes as doctors accused the government of “letting down its guard” and said “inconsistent” messaging since the nationwide lockdown was lifted had played a part in the resurgence of the virus.

The British Medical Association (BMA) said clearer, stronger measures are needed to halt the spread of the COVID-19 outbreak – and published a list of recommendations it says could reduce the nation’s level of infection while providing people with the confidence they need to go out safely and boost the economy.

Chairman of the doctors’ trade union body, Dr Chaand Nagpaul, said: “The infection has risen following rapid relaxation of measures and with the Westminster government letting down its guard – as recently as August, the government was encouraging people to travel, go to work and mix in restaurants and pubs.”

He added: “With admissions to hospitals for COVID climbing rapidly in parts of England, there is an opportunity for the Westminster government to bring in simple stronger restrictions alongside the introduction of it … three-tiered approach.”

In a joint letter to the chancellor and health and housing secretaries on Friday, mayors and councillors said another lockdown will result in the “levelling down” of the region.

They said: “We remain to be convinced that further restrictions that involve closing businesses would be the most effective way of tackling the virus, particularly when the health of our economy, people’s jobs and livelihoods are at stake.

“Therefore, we are concerned by rumours in the media that we might be pushed into Level 3 of a new system set to be introduced, without any discussion or consultation, or without adequate economic measures put in place to support affected people and businesses.

“Another lockdown will have a devastating effect on our town and city centres and the overall regional economy. It will result in a levelling down of our region and undo the good work we have done over the last decade to improve the fortunes of our people.”

Fresh measures could be implemented in the northwest of England as soon as Wednesday because of rising cases of COVID-19, Sky News understands.

A number of possibilities were outlined during a telephone meeting between local leaders and Westminster figures, including the prime minister’s chief strategic adviser Sir Edward Lister, on Friday.

Housing Secretary Robert Jenrick was also on the call.

Sources from the meeting have told Sky News the government proposed advice which would stop people travelling in and out of the worst-hit areas.

The sources also said the government plans to take its proposed measures to parliament on Monday for implementation on Wednesday.

The three-tier system – known as Local COVID Alert Levels – are expected to be medium, high and very high.

Under a very high alert, pubs and bars would have to shut, but not restaurants.

Sir Edward has said it is “very likely” that certain local areas will face “further restrictions” because of a “rising incidence” of COVID-19.

In a letter to MPs, he said the government would discuss “difficult choices” with local leaders.

Sir Edward added that Mr Johnson believes local leaders should “help shape the package of measures in the most concerning areas”.

The expected measures in the north of England come as Fiona Lemmens, chair of the NHS Liverpool Clinical Commissioning Group, said the situation in the city’s Aintree and the Royal hospitals is “very concerning”.

She continued: “All of the indicators are that the situation is going to get worse over the next two to three weeks as our current high community transmission rates convert into hospital admissions.

“The age of affected patients is much higher in Liverpool than elsewhere in the North West so we can expect to see growing demand for hospital and Intensive Therapy Unit beds.”

New restrictions will be introduced in the northwest of Wales at 6pm on Saturday.

The developments come while there are concerns that an expansion of the UK-wide Job Support Scheme, announced by Chancellor Rishi Sunak, may not go far enough.


What do businesses think of new support?

Workers at businesses forced to close because of stricter lockdown measures will have two-thirds of their salaries paid by the government.

Mr Sunak said the policy would “provide a safety net for businesses” and was offering the “right support at the right time”.

Four northern mayors said the expansion of the scheme was a “start”.

But Andy Burnham, mayor of Greater Manchester, Jamie Driscoll, mayor of North Tyne, Dan Jarvis, mayor of the Sheffield City region, and Steve Rotheram, mayor of the Liverpool City region, added: “On first look, it would not appear to have gone far enough to prevent genuine hardship, job losses and business failure this winter.”

They and other northern leaders will be meeting on Saturday to discuss the idea “in more detail”.

:: Subscribe to the All Out Politics podcast on Apple Podcasts, Google Podcasts, Spotify, Spreaker

The pub trade is one in which “everyone’s on national minimum wage pretty much”, and a lot of staff “are living hand to mouth already and they’ve already had hours reduced”, she said.

In the regular daily update, another 13,864 coronavirus cases and a further 87 deaths were announced across the UK on Friday.

Five of the 22 European regions with the highest coronavirus infection rates are in the north of England, Sky News analysis has found.

And the UK’s coronavirus reproduction (R) number has decreased slightly to a maximum of 1.5, according to the latest government figures.