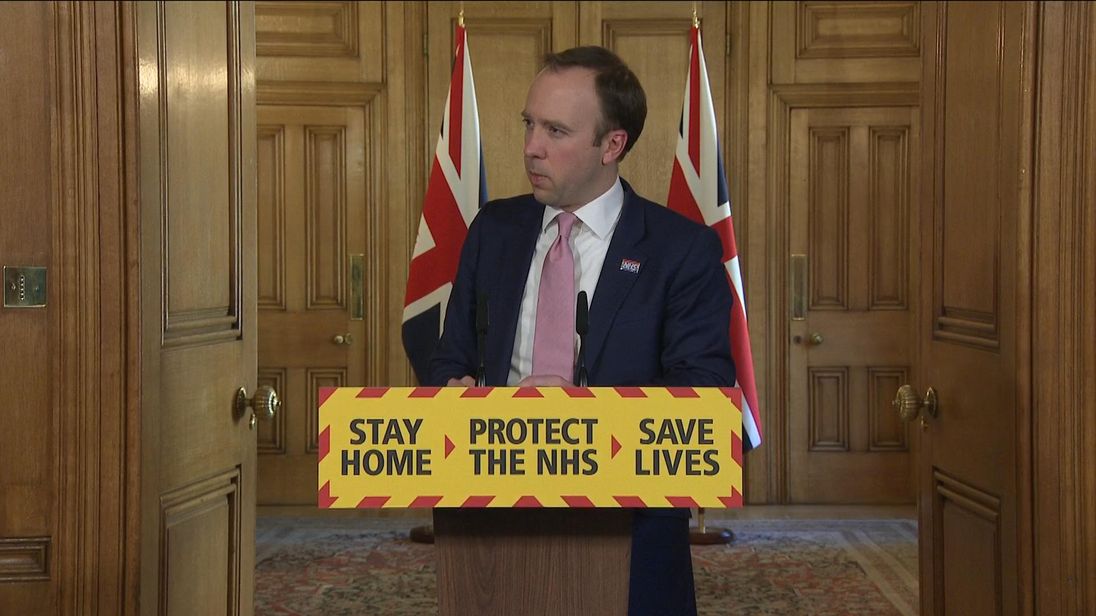 Health Secretary Matt Hancock revealed he has lost two people he was “fond of” to coronavirus – as he warned the nation to obey the lockdown or face a ban on outdoor exercise.

Mr Hancock – who has recovered after contracting the disease himself – told the daily Downing Street news conference that he “understands how difficult” coronavirus is for the country after two people he knew passed away.

His remarks came on a weekend when people were pictured enjoying the warm weather in parks and other green spaces across the country.

Earlier, Mr Hancock’s message to the British public on Sky News’ Sophy Ridge On Sunday programme was clear: if you want the coronavirus lockdown to end, follow the rules.

He said: “The vast majority of people are following the public health advice, which is absolutely critical, and staying at home.

Asked whether sunbathing in public spaces was against the law, he said: “Sunbathing is against the rules that have been set out for important public health reasons.”

He warned those who are flouting the guidance: “You are putting others’ lives at risk and you are putting yourself in harm’s way.”

The minister later said he didn’t want to further restrict people’s freedom, but would take action if the rules continued to be flouted.

He told the BBC’s Andrew Marr Show: “We’ve said it’s okay to go for exercise because both the physical and mental health benefits of getting some exercise are really important.

“I don’t want to have to take away exercise as a reason to leave home… if too many people are not following the rules.”

He added: “If you don’t want us to take the next step and ban exercise… then the message is very clear… you have to follow the rules.”

Government rules state that people should only be leaving their house during the lockdown for food, health reasons, outdoor exercise or to go to work if they cannot do their job from home.

Mr Hancock and other senior government figures including Prime Minister Boris Johnson had urged the public not to flout those social distancing measures ahead of the weekend, warning that it would put more lives at risk.

Another 621 coronavirus victims across England, Wales, Scotland and Northern Ireland were confirmed by the Department of Health and Social care earlier on Sunday, taking the UK total to 4,934.

Eufy security camera bundle on sale for $343 at Best Buy

Most Memorial Day deals have ended, but 4K TVs are still on sale

‘Minecraft Dungeons’ aims to be more than ‘baby’s first Diablo’

Eufy security camera bundle on sale for $343 at Best Buy

Most Memorial Day deals have ended, but 4K TVs are still on sale

‘Minecraft Dungeons’ aims to be more than ‘baby’s first Diablo’