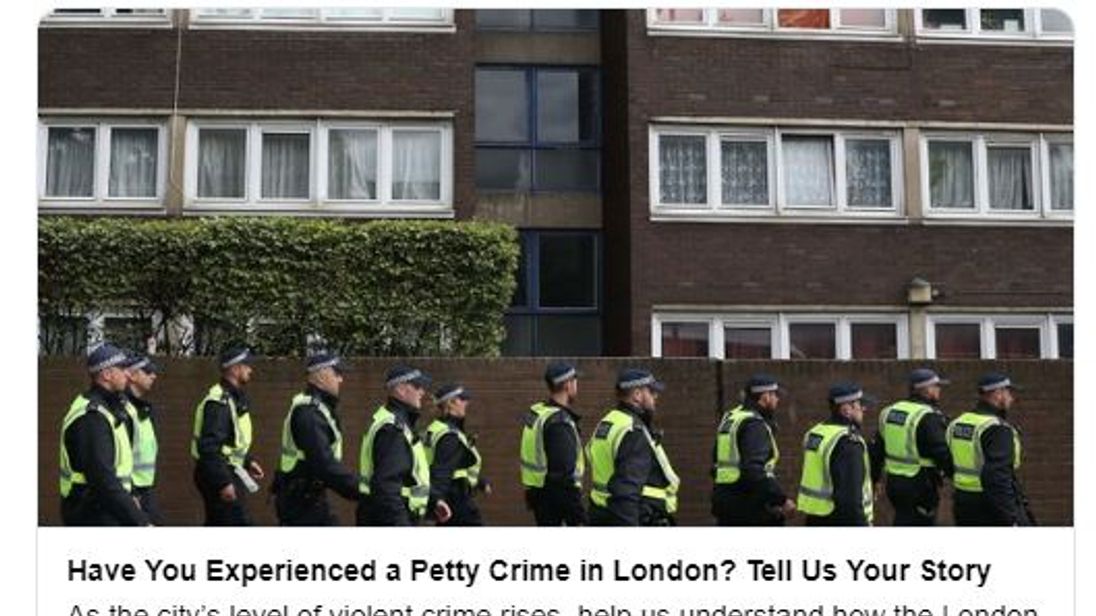 Britons have trolled a US newspaper after it claimed petty crime is not dealt with in London.

A New York Times article by London correspondent Ceylan Yeginsu said that after a decade of austerity, police in the city were “unable to pursue most suspects involved in minor property crimes”.

The article asked Londoners to tell their stories of how the police had failed to deal with small crimes and Ms Yeginsu revealed she had been a victim of burglary while living in London.

I was walking down Regents St when I saw a sign in a shop saying “Coming this Fall”. Fall? It is not Fall, the correct term is autumn. What next? Studying Maths without the S?

I commented on the drizzle to someone at work, but they said they’re not really interested in talking about weather.
They’re banged up in Pentonville now but I dread the day they get out. It might be a 30 year sentence for them but it’s a life sentence for me.

She wrote: “Only 4% of all domestic burglaries in London were solved between April 2017 and April 2018.

“While the number of suspects caught for all crimes has halved over five years to 9%.

“I am a London-based reporter for The Times who has covered crime in Britain for the past two years. Two months ago my apartment was burgled, and I have had my own experience with this.

“If you live in London and have had issues with the police’s response to petty crime, I would like to hear about your experience.”

Rather than eliciting tales of woe for the journalist to write about, the article triggered a stream of humour and sarcasm.

One responder complained of being served a Darjeeling tea despite ordering an Earl Grey.

A man claimed he had been pick-pocketed by a Fagin-like old man and his gang of orphan children as depicted in Charles Dickens’ Oliver.

Another complained of someone pushing in front of them in a queue while someone else said they had witnessed a pigeon steal a mayonnaise sachet from an elderly couple on a park bench.

Tony Blair’s former communications chief, Alastair Campbell, joined in. He tweeted: “Busker in the Tube admitted he didn’t declare all his earnings to the taxman.”

:: Someone made eye contact with me on the Tube once. The culprit is still at large, despite a massive police operation

:: Once on the Northern Line in Clapham a small group of people spontaneously sung a Christmas song – council and police failed to issue ASBOs to any offenders

:: A charlatan didn’t have his Oyster card ready this morning before getting to the front of the underground queue. Audible tutting ensued

There is a dangerous gang holding the entire country hostage. They’re called the ERG. Help!

Saw a chap the other day wearing red trousers and loafers without socks. IN BROAD DAYLIGHT.

I was on the tube with my small baby and she kept trying to make eye contact with other passengers and smile at them. Hooligan. #PettyCrime

Man who had ears cut off in Blackburn street attack dies