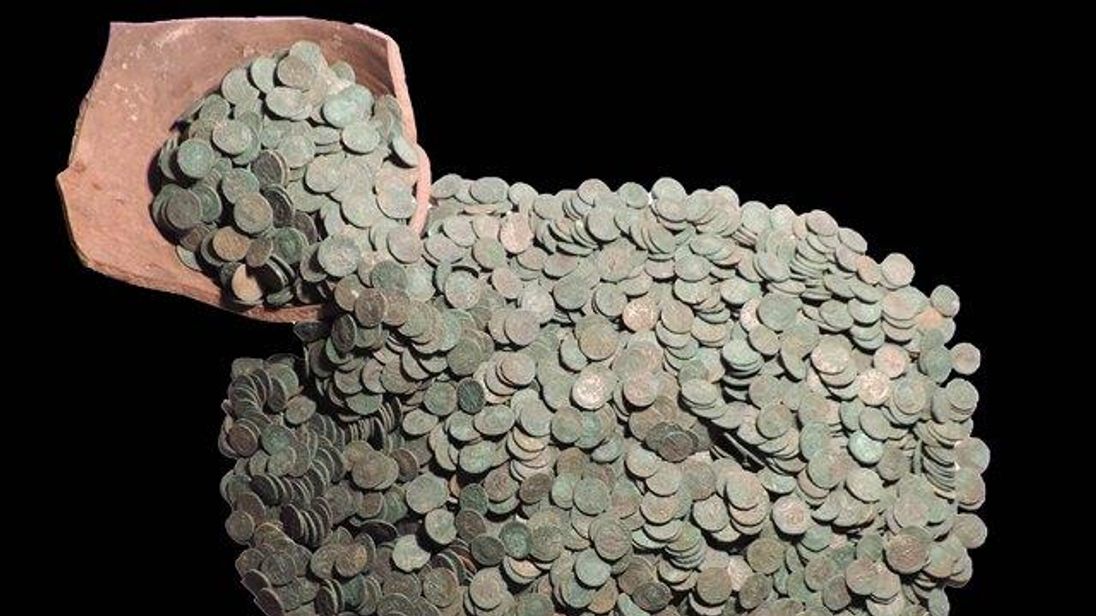 A hoard of early fourth century Roman coins which was discovered by two metal-detecting enthusiasts is thought to be the largest haul of its kind to be found in Britain.

The discovery was made in July 2017 near the village of Rauceby in Lincolnshire, which detectorists 59-year-old Rob Jones and his friend Craig Paul, 32, had searched for years.

Lincolnshire County Council archaeologist Dr Adam Daubney said the coins may have been buried as part of a ceremonial ritual.

“The coins were found in a ceramic pot, which was buried in the centre of a large oval pit – lined with quarried limestone,” he said.

“What we found during the excavation suggests to me that the hoard was not put in the ground in secret, but rather was perhaps a ceremonial or votive offering.

“The Rauceby hoard is giving us further evidence for so-called ‘ritual’ hoarding in Roman Britain.”

The more than 3,000 copper alloy coins are being examined by The British Museum and will be valued.

The museum’s curator of Iron Age and Roman coins, Dr Eleanor Ghey, said: “At the time of the burial of the hoard around AD 307, the Roman Empire was increasingly decentralised and Britain was once again in the spotlight following the death of the emperor Constantius in York.

“Roman coins had begun to be minted in London for the first time.

“As the largest fully recorded find of this date from Britain, it has great importance for the study of this coinage and the archaeology of Lincolnshire.”

Recalling the discovery, Mr Jones said he and Mr Craig started to dig after their metal detectors started beeping.

He said: “I couldn’t believe what I was seeing. I’ve found a few things before, but absolutely nothing on this scale.

“I was totally amazed. Finding the coins was the ultimate experience that we will never forget.

“It’s an incredibly humbling experience knowing that when you discover something like this, the last time someone touched it was nearly 2,000 years ago. I was completely flabbergasted.”

The coins were officially declared treasure under the Treasure Act 1996 at Lincoln Coroner’s Court on Thursday.